Which positions are Manchester City targeting in the summer transfer window? What has Pep Guardiola said? And what do the stats say?

Which positions are Manchester City targeting?

The Premier League title still hadn’t been won by the time Manchester City confirmed a deal to sign the crowning piece of their recruitment jigsaw. Erling Haaland finally ends the two-year search for a top-level central striker to replace club record goalscorer Sergio Aguero. Haaland grew up supporting Man City thanks to his father’s time playing for the club, and there will be huge fanfare when the 21-year-old takes to field at the Etihad for the first time in sky blue.

However, while Haaland understandably has top billing, his young understudy gave us a timely reminder of the quality he could also bring to the City frontline next season. Julian Alvarez, 22, is due to arrive in time for pre-season, having been signed for £14m in January before returning to Argentina on loan. Like Haaland, he’s an exciting and highly-rated young striker, and the six goals he scored for River Plate in a Copa Libertadores match have got the City fans buzzing with anticipation.

After he lifted the Premier League trophy for the fifth time, Fernandinho’s departure leaves a huge hole in the squad, and it’s no secret the club are actively looking at a central midfielder this summer to replace their club captain. England midfielder Kalvin Phillips is the latest to be linked, along with Barcelona’s Frenkie de Jong, both of whom could play alongside Rodri when required to offer more control in the middle of the pitch against elite teams.

City found themselves short of defenders during the final weeks of the season – Fernandinho had to fill in at both centre-half and right-back due to an injury crisis – so a full-back is also on Pep Guardiola’s wish-list to ensure they don’t suffer the same problems next time around.

Having added Haaland, City are already pre-season title favourites. If they do also manage to strengthen in defence and midfield then it’s an even more formidable prospect for everyone else.

What do the stats say about Manchester City?

There is not much room for improvement for the Premier League champions – they have already addressed the issue of not having a front-line striker with the signing of Erling Haaland. However, if there is a cause for concern, it is how they perform without their midfield engine, Rodri.

He has won the most recoveries and has the second-most touches and successful passes in the division this season. Furthermore, City’s win percentage dropped from 77 per cent to 43 per cent in the games he did not play (Premier League and Champions League) this campaign.

The Spain international was an unused substitute for their opening-day defeat against Spurs and the draw against Southampton one month later. Additionally, Pep Guardiola’s side lost the Community Shield and were knocked out of the Carabao Cup and FA Cup when he did not play.

The departure of Fernandinho, another player who can play in his role, emphasises the need to recruit in this department. 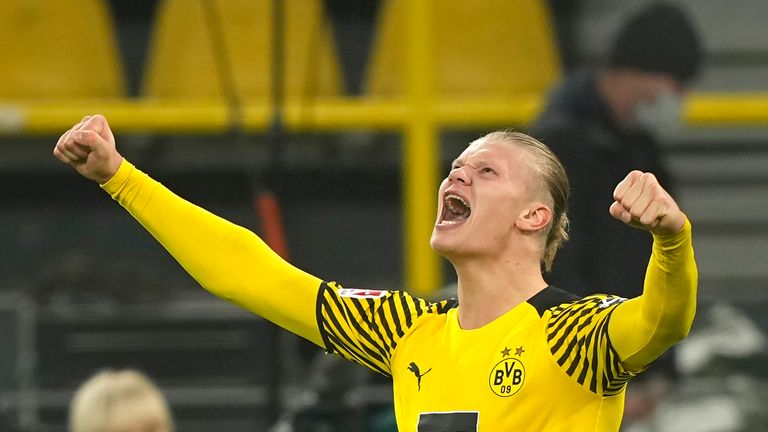 Manchester City chairman, Khaldoon Al Mubarak, has high expectations for the arrival of Erling Haaland, as well as revealing the club’s future plans and how he felt on the dramatic final day of the season against Aston Villa.

The Premier League champions have already secured a deal for the much-coveted Borussia Dortmund striker Erling Haaland and their attack will be further boosted by the arrival of Argentina international Julian Alvarez.

Yet that is unlikely to be the end of the transfer activity ahead of next season with manager Pep Guardiola also looking for additions in other areas.

Speaking in his annual end-of-season interview with the club’s website, Khaldoon said: “I can confirm that there will be more players coming in.

“We are looking to strengthen the team in the areas that we need strengthening, and every season some players leave and we have to continually refresh the team.

“I think we’ve made two very important additions already but I anticipate we will be doing a couple more.”

What has manager Pep Guardiola said?

Manchester City manager Pep Guardiola speaking at the end of the season:

“I think the team and the squad is strong. The club have the duty [to sign players] – not me. I know they are working on that and always thinking to maybe review.

“You always have to think maybe five players are going to leave – which new five players have to come in? Which players from the academy could be [involved], not just training. This has to be constant, every month, not years.

“The situation changes season by season because the players want to play. When you have an incredible squad like we have of 22, there are players who don’t play much and they want to play and be happy and prove another thing.

“Here, the perspective is different because they visualise they are going to play and these players who are going to leave have to be replaced. That’s why we constantly have to be prepared. But I think with the squad we have, my personal opinion – I spoke a little bit with Txiki [Begiristain] – not much [will be needed].”

What should Manchester City do this summer?

As Guardiola says, this City squad hardly needs a major overhaul, having just won a fourth Premier League title in five seasons. But the club know they need to keep improving to maintain the incredible standards they’ve set.

They impressively moved quickly to activate Erling Haaland’s release clause and that could well be the standout signing of the window, with the frontman filling the striker’s role City managed to go without during this campaign. If he can translate his Borussia Dortmund scoring form to the Premier League, City’s title rivals will be in trouble.

January signing Julian Alvarez looks like a star in the making and could well add to City’s attacking options when he switches River Plate for Manchester this summer, assuming there’s no immediate loan away. The futures of Gabriel Jesus – linked with Arsenal – and Raheem Sterling – out of contract at the end of next season – could play a role in that decision. But a refresh in attack would be no bad thing.

We know Fernandinho is definitely leaving the club at the end of his deal next month, though, and a top defensive midfielder to share the load with Rodri will be on the shopping list. Fernandinho has been a fantastic servant but Leeds’ Kalvin Phillips would fit the bill as a potential replacement.

Left-back is also likely to be on the agenda. While full-back Joao Cancelo can play either side, a first-class option on the left would boost City’s backline. Oleksandr Zinchenko has done a handy if unspectacular job adapting to play in that position, but with Benjamin Mendy unavailable and his contract expiring, it’s a role that needs strengthening. Brighton’s Marc Cucurella could be an option.