West Brom’s hopes of making the Sky Bet Championship play-offs were left hanging by a thread as two late goals saw them fall to a 2-0 defeat to Swansea.

Joel Piroe’s second goal in three games and 15th this season put Russell Martin’s men into the lead (79), with Cyrus Christie slamming in five minutes later to spark a mass exodus of Baggies fans, which preceded a loud chorus of boos at full time.

Steve Bruce’s side have now failed to score in each of their last three Championship games at The Hawthorns for the first time since November 2003 under Gary Megson. Joel Piroe finished a lovely counter-attack as his goal gives his Swansea side a 1-0 lead over West Brom at the Hawthorns.

They remain 13th as a result of a fifth winless game of Bruce’s tenure, eight points behind sixth-placed Luton with 12 games left to play. Swansea climb to 16th. 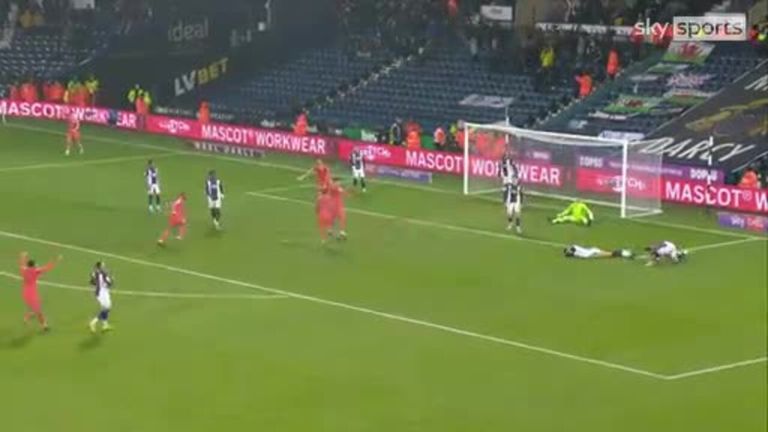 While Russell Martin’s Swans look neither in danger of relegation nor holding onto hope of a dash for the play-offs, the clash was undoubtedly crucial for the Baggies in order to keep their ailing play-off bid alive.

They had won just one game since December 11 and scored just five goals in that 11-game stretch, with Bruce having lost three of his opening four in charge. The form guide made for miserable reading.

As they like to do, Swansea dominated the ball in the early stages and, with 20 minutes gone, Andy Carroll had had just two touches of the ball, which summed up how things were progressing for the hosts, from an attacking perspective, at least.

Robinson then flicked a smart header off the left-hand post with Swans goalkeeper Andy Fisher rooted to the spot, before Grady Diangana had a baseless penalty appeal turned down and Kyle Bartley fired a shot into the ground and past the post.

Just before the break, Matt Grimes wrapped his foot around the ball and lifted a shot just inches past the right-hand post, while Christie stung the palms of Sam Johnstone with a header from point-blank range. It was the last action for quite some time, with a real slow tempo to much of the second half.

Robinson struck the woodwork for a second time as the final whistle approached, but within three minutes of him doing so, Piroe held his run and met an inviting cross from substitute Olivier Ntcham on the penalty spot to opening the scoring.

And the Swans double their lead soon after in a similar way, when a cross from the left drifted all the way through to on-loan Fulham man Christie, who thumped his shot through Johnstone’s hands and into the back of the net.

Man of the match – Joel Piroe

“That was only his second goal in the last 10 games, but he broke the deadlock tonight after some intelligent attacking movement. That goal changed everything for Swansea and made it impossible for West Brom to turn it around.”

Both teams are back in action at 3pm on Saturday March 5. West Brom take on Hull at the MKM Stadium, while Swansea host Coventry at the Swansea.com Stadium.

US Must Do “Whatever Possible” to Back Ukraine