There are 25 days left till the 2023 All-Star clash goes down in Salt Lake City on February 19. So of course, what is left to do, other than get Sky Sports’ NBA pundits to predict which players might feature in the starting line-ups?

Center: Nikola Jokic! He’s the best passing player who’s not a point guard in the history of basketball.

Forward: Jayson Tatum, he’s leading the Boston Celtics to the best record in the NBA.

Forward: Kevin Durant. He continues to get buckets at 34, climbing the all-time scoring ranks. (Will the return from injury change things?) 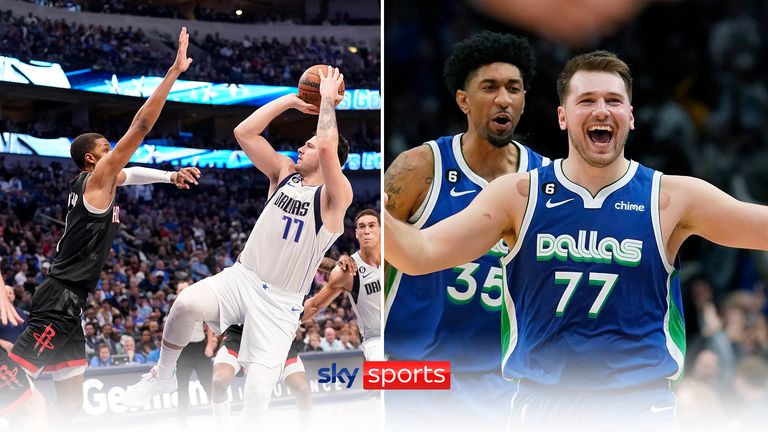 As Luka Doncic is named the NBA’s Player of the Month for December, here’s a look back at some of his incredible performances throughout the month.

Center: Jokic can win a game without scoring purely because of his IQ. But I’m going with Joel Embiid because I’m a Philly fan and he’s the second coming of Hakeem Olajuwon.

Forward: Tatum, killing it yet again, leading the Celts to the top of the Eastern Conference. Was tempted to put Jaylen Brown here instead, but Tatum edges it.

Guard: Spida (Mitchell). If he doesn’t start, there will be riots.

Notable mentions: Jalen Brunson deserves a nod, he’s been absolutely explosive recently. Stephen Curry too. He’s still putting up numbers, but the Dubs’ talisman could see himself out of a starting spot this year. We also need to appreciate the comeback of Markelle Fultz! The man is fighting hard to get rid of that bust label.

Center: Jokic again. If it’s going to come down to Embiid and Jokic, I’ve personally got to go with the Joker – plus, Doncic and Jokic are a great double act!

Forward: James. I know, I know, but All-Star isn’t just about stats. It’s also about stars, and there’s none with more star power than LBJ. He’ll probably surpass Kareem Abdul-Jabbar for career points by then too, which doesn’t hurt.

Forward: Antetokounmpo; the best player in the world and you can always rely on him to actually have fun at the All-Star. He’s consistently one of the weekend’s most entertaining players and personalities to watch.

Guard: Doncic. All-Star is a spectacle and it needs the NBA’s best magician.

Guard: Mitchell. As a Jazz fan, I’m loving how suddenly everyone appreciates Spida now that he’s left Utah… *WE’VE BEEN TRYING TO TELL YOU!* Let him have the weekend this time where he’s not the brunt of the same old tired jokes.

Center: I have to agree with everyone else, it can’t be anyone other than Jokic. The man racks up triple-doubles for fun, and isn’t even working at full capacity this season with Jamal Murray and Michael Porter Jr, back. Insane.

Forward: Tatum, for multiple reasons. He leads the league’s best offence, rarely misses a game, and is averaging 31.2 points.

Forward: Durant. A big decision to drop Antetokounmpo, but unfortunately, Giannis has been a little suss without Khris Middleton’s support. Plus, I have to believe in what we saw from Durant prior to the strain: crazy ability to pass from anywhere on the court, and doing it like nobody else at 34.

Guard: Mitchell booked his place before anyone else when he scored 71 points against the Chicago Bulls in January. Donovan Mitchell scores a franchise-record, career-high 71 points as the Cleveland Cavaliers defeat the Chicago Bulls in overtime. Mitchell becomes only the seventh player to score over 70 points in NBA history.

Sources: Apple is quietly enhancing maps, search, and online advertising on iOS to further separate its services from those offered on rival Android (Patrick McGee/Financial Times)